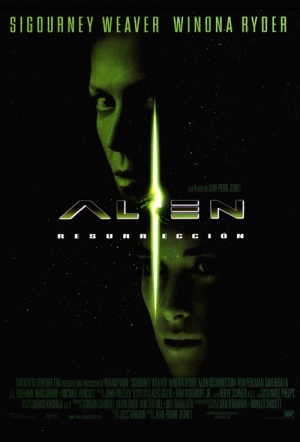 The fourth Alien movie, set 200 years after Alien 3. Winona Ryder joins franchise heroine Sigourney Weaver, while Frenchman Jean-Pierre Jeunet (who would go on to do Amelie) directs a script by Joss Whedon (Buffy the Vampire Slayer).

Aboard the space station Auriga, doctors clone Ellen Ripley (Weaver) to harvest the alien queen implanted in her body when she died. Hoping to study the alien and foolishly believing they can contain it, the ship's military personnel soon have a flesh crunching savage on the loose. It's up to Ripley again to destroy the being, before the Auriga arrives on Earth.

It'll divert your attention from the final demands for a couple of hours, but, as the series drifts further away from James Cameron's definitive masterpiece, there seems to be less and less point.

This is a series whose inspiration has come, gone, and been forgotten. I'm aliened out.

If you need to read a review to decide if you want to see "Alien Resurrection," you absolutely shouldn't be going.

Full of black humour and atmosphere. Much better than Alien3.