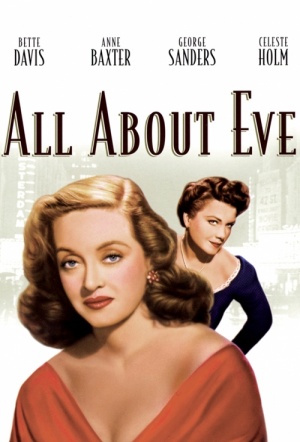 Bette Davis' tour de force performance in All About Eve resurrected her fading career at 42, in an era where starring roles for ageing actresses were non-existent. She plays Margo Channing, an ageing Broadway star with a penchant for Martinis and bon mots. Starlet Anne Baxter is Eve, a wide-eyed ingénue who insinuates herself into Margo's life and social circle, with an eye to taking her throne. From writer/director Joseph L. Mankiewicz - a filmmaker notorious for movies exploring the female psyche - All About Eve scooped the major awards at the 1951 Oscars and BAFTAs.

All four of the lead actresses garnered an Oscar nomination - still the only film in history to achieve such a feat. Also features Marilyn Monroe in one of her earliest film roles.

All About Eve / Reviews

Plush in every department.

Has more quotable dialogue in one movie than most screenwriters manage in a lifetime.

A fine Darryl Zanuck production, excellent music and an air of ultra-class complete this superior satire. The legitimate theatre had better look to its laurels.

Davis was a character, an icon with a grand style, so even her excesses are realistic.

Mankiewicz's flair for dialog is so perfected that all three actresses shoot fireworks whenever they open their mouths.

This is Baxter vs. Davis in one of Hollywood's greatest showdowns.