The first act of Allied contains basically everything I want from a glossy, old-fashioned Hollywood crowd-pleaser – photogenic and well-matched stars delivering nimble, witty dialogue, an intriguing story unfolding in a charismatic location, plush production values, evocative art direction, and Marion Cotillard in a slinky evening gown mowing down Nazis with a sub-machinegun. To be perfectly frank, this last sight is something I never knew I needed to see so badly – this, friends, is the sort of thing cinema was invented for.

Once the action moves from Casablanca to London, a lot of the movie’s fizz evaporates, and for the next hour or so we get a solid if unspectacular espionage potboiler punctuated with some entertaining but ridiculous details (the baby delivery scene really has to be seen to be believed…) The film was losing its way, but I was still on board, carried along by residual goodwill from the stellar opening and my hopes that the film might rouse itself for a similarly entertaining finale.

Those hopes were mercilessly dashed.

Maybe Allied’s ending made sense on the page, but after enjoying nearly two hours of gorgeous and glamourous spy shenanigans, I was left slightly dazed, wondering whether the writer and director actually understood their own movie. This ending is a disaster, a tone-deaf miscalculation that retroactively taints the entire film, a colossal failure to understand the spirit and style of the preceding two hours. Is there anyone out there who wanted this ending from this movie? And if so, dear God, why?

So it’s a shame to report that Allied is ultimately a disappointment – as far as 1940s-set romantic espionage thrillers go, Notorious still doesn’t have anything to worry about. Hell, even something as airheadedly daft as Shining Through had a superior understanding of how these sorts of movies are supposed to work. But if you’re a fan of Hollywood’s Golden Age, Allied is probably worth sitting through at least once. And, to give it its due, it does feature Marion Cotillard in a slinky evening gown mowing down Nazis with a sub-machinegun, and no ending, no matter how misguided, can completely tarnish that. 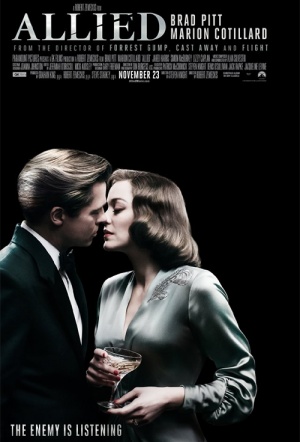