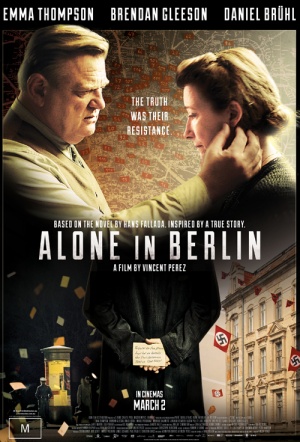 A working class German couple take to protesting the Nazis after losing their son at war. Nominated for the Golden Bear at the 2016 Berlin Film Festival.

"Anna (Emma Thompson) and Otto Quangel’s (Brendan Gleeson) son has been killed on the front line. They begin writing postcards as a form of resistance and in a bid to raise awareness: Stop the war machine! Kill Hitler! Putting their lives at risk, they distribute these cards in the entrances of tenement buildings and in stairwells. But the SS and the Gestapo are soon onto them, and even their neighbours pose a threat." (Berlin Film Festival)

Stoic, straight-bat scripting and direction can make the film seem more dreary than it really should be.

Though it's visually handsome it tends rather towards the bland... too tasteful and muted.

Alone In Berlin, like The Book Thief, can't find the depths, darkness or daring to stand out.

Daniel Brühl easily wrests the movie away from (Thompson and Gleeson) in his B-story scenes...

Finally cushions its harshest emotional blows, though Brendan Gleeson's deeply sad, stoic dignity in the lead cuts through some of the padding.

"Alone in Berlin" proceeds like a train crossing a plain. Without twists or turns, hills or valleys, its dramatic engine chugs reliably forward, delivering its cargo of World War II tragedy with bland efficiency.

The original story remains fascinating, but it feels like it’s been planed down, and smoothed away, into something more obviously digestible.

It's that juxtaposition - of the hellish against the ordinary - which gives the film its punch.

Fails to leave a lasting impression.

A pity Perez's understated approach doesn't do their story justice.

A well-acted but creaky and curiously bloodless portrait of life during wartime from the Swiss-born actor turned director Vincent Pérez.

Handsomely packaged, the film unfortunately is also too well-behaved and lacking in psychological depth to really set itself apart from countless other WWII dramas theatrically...

There are just no peaks and troughs, which is remarkable given the tremendously heavy content of the film.