An interesting blend of reality and fiction... of documentary and crime-thrillers?

Surprisingly, it works, and it works well.

My favourite part of this film is not its "real story" narrative, nor its well-suited soundtrack (featuring singles from Leonard Cohen, Donovan, The Doors, etc.), it isn't the fact that life lessons (I wouldn't really go as far as emphasising the philosophical aspect of the film as some critics have done, because I was left underwhelmed in that department) learnt by relatable characters were thrown at me and into a very fragile place, but the undeniable wit in the visual presentation of "American Animals".

Nevertheless, though it would be ignorant to deny the film of its achievements in terms of innovation (presentation-wise), one cannot help but feel that the entire experience wasn't wholly unique nor risky or dangerous. But its heart and honesty are virtues to be praised. The acting works well, the tone is done well (comedy and suspense are crafted "well", though there was one scene in which the theatre burst out laughing when I suspect they weren't supposed to be from the film-maker's pov, but who knows).

Yeah. Enjoyed this one, and recommend it to anyone who's looking for something fun and touching. 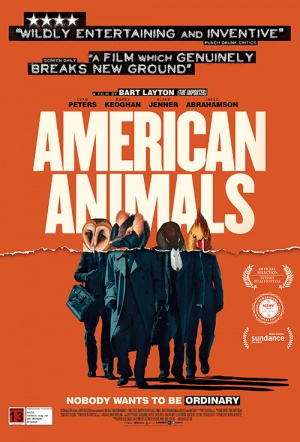