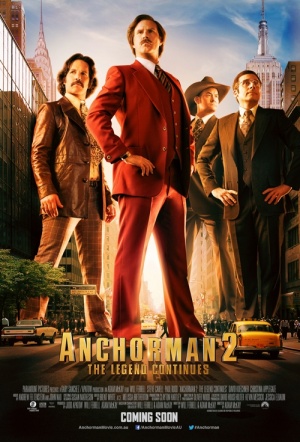 Will Ferrell, Steve Carell, Paul Rudd and Christina Applegate all return to continue the legacy of the unparalleled, still classy, Ron Burgundy. They are joined by an impressive cameo list including Kristen Wiig and Harrison Ford. This time the San Diego news crew are taking New York's first 24-hour news channel by storm.

Since the events of the first film, Ron (Ferrell) and Veronica Corningstone-Burgundy (Applegate) have become San Diego's most beloved husband-and-wife news presenters, but when Veronica is presented with a terrible dilemma the result is another rock bottom experience for Ron. The emergence of round-the-clock news coverage throws him a lifeline and Burgundy re-assembles the team. On his road to glory, Ron faces struggles with romance, race relations, ethics, an Australian boss, the ocean's deadliest predator and a jazz flute.

In 2004 Anchorman: The Legend of Ron Burgundy arrived in hilarious fashion just before the world hit Peak Ferrell. Suitably outrageous and over-the-top, it set a high bar that its lead would struggle to match as he went on to do “it’s Will Ferrell as a kids’ soccer coach/Nascar driver/basketball player” films and – for a couple of years there – seemed to have outstayed his welcome.

Bigger and broader than before, Ron’s return occasionally feels like autocue’d sequel-making. But it spikes old news with enough fresh comic zip to keep you hooked through the self-indulgent stretches.

Anchorman 2: The Legend Continues is not the disaster some feared it might be, but neither is it the endlessly quotable, deliciously idiotic follow-on so many of us were optimistically anticipating.

This Anchorman sequel knows who its fans are, and does its best to keep them happy. No one will be complaining.

A deliriously barmy, laugh-out-loud sequel that manages to top the much-loved original, with fond nods to Australia in tow.

Comedically, everyone's on the same page here, which means that, even when things flag, more fun isn't far off.

Patchy and in need of a rigorous edit, but amid all the weeds there is some ripe comedy (satire, even) for the plucking. Clip: How I Talk