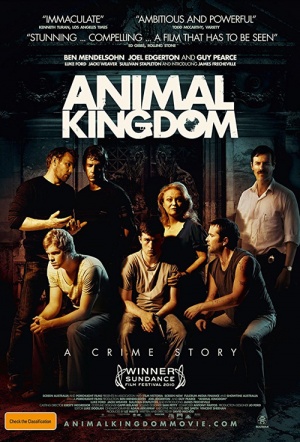 "Armed robber Pope Cody (Ben Mendelsohn) is in hiding, on the run from a gang of renegade detectives who want him dead. His business partner and best friend, Barry ‘Baz’ Brown (Joel Endgerton), wants out of the game, recognising that their days of old-school banditry are all but over. Pope’s younger brother, the speed-addicted and volatile Craig Cody (Sullivan Stapleton), is making a fortune in the illicit substances trade – the true cash cow of the modern criminal fraternity. Into this criminal world arrives their nephew, Joshua ‘J’ Cody (James Frecheville). Following the death of his mother, J finds himself living with his hitherto estranged family, under the watchful eye of his doting grandmother, Smurf (Jacki Weaver), mother to the Cody boys. J quickly comes to believe that he is a player but, as he soon discovers, this world is far more menacing than he could ever imagine..." (Official Synopsis)

The film's depiction of the raw fear lurking below the brothers' braggadocio is the most pronounced emotion in a movie whose focus on the personalities of its criminals suggests an Australian answer to "Goodfellas," minus the wise-guy humor.

Writer-director David Michôd catches you in a vise and squeezes - hard.

A naturalistic drama rich in psychology and attention to details. There's no glamour here, but one false move by anyone can result in death, so tension fills nearly every scene.

Outstanding. Never before has a tale of crime and punishment been so exquisitely handled by one of our own. This is a towering achievement.

A primal, pulsating story of one family heading over the edge.