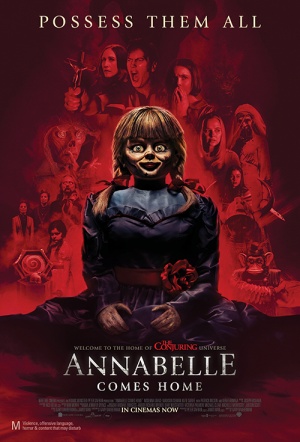 To stop Annabelle from causing more chaos, demonologists Ed (Wilson) and Lorraine Warren (Farmiga) place her behind sacred glass in a room in their home that is full of locked artifacts. But when Annabelle eventually awakens, she also awakens the other evil spirits in the room - all of them now setting their sights on the Warrens' young daughter Judy (Mckenna Grace, I, Tonya) and her friends.

That fixed grin of hers promises a great deal of mischief, and "Annabelle Comes Home," in its almost completely haphazard and what-the-hell-let's-go-to-hell way, delivers it.

Why unearth Milton Bradley's forgotten 1967 board game Feeley Meeley - in which you reach into a box and grab... who knows what? - and not take it to the icky place it needs to go? The film is filled with these kinds of missed opportunities.

Ultimately, the scariest thing about Annabelle Comes Home is that despite its utter emptiness, more sequels, prequels and spin-offs will follow regardless.

I like a film that knows what it was put here to do – and does it in a way that respects and rewards its intended audience. Annabelle Comes Home achieves all that – and more.

"Annabelle Comes Home" has effective scare sequences, especially as the film ratchets up the tension in its final reels, but this sequel ultimately feels too mechanical, and too familiar, to unnerve as proficiently as previous entries.

If you enjoy the genre, and a yelp, this certainly delivers.

The thrills and shocks gradually become repetitive, as the writer-director recycles his own material, forcing the girls to evade the same threats again and again.