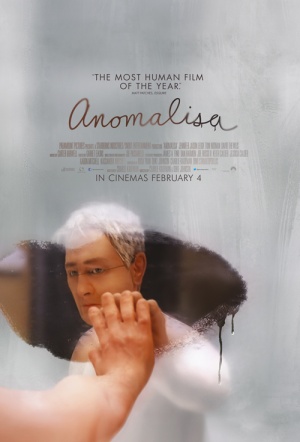 Academy Award-winning screenwriter Charlie Kaufman (Eternal Sunshine of the Spotless Mind) writes and co-directs this stop-motion animated drama with shades of absurdist humour, following a self-help “guru” who can’t seem to help himself.

Michael Stone, husband, father and respected author of “How May I Help You Help Them?” is a man crippled by the mundanity of his life. On a business trip to Cincinnati, where he’s scheduled to speak at a convention of customer service professionals, he checks into the Fregoli Hotel. There, he is amazed to discover a possible escape from his desperation in the form of an unassuming Akron baked goods sales rep, Lisa, who may or may not be the love of his life.

The other co-director of the film, Duke Johnson, is known for his television works directing Frankenhole, Moral Orel, and the stop-motion episode of Community.

You don't get much more niche than Anomalisa – a crowd-funded stop-motion animation from master headchuffer Charlie Kaufman, writer of Being John Malkovich, Eternal Sunshine Of The Spotless Mind and Adaptation. Unheard from since his frustrating 2008 directorial debut Synecdoche, New York, Kaufman creates cinema of grouchy self-doubt and grotesque self-deception, but anyone not already clued-in may wonder what they’ve stumbled upon.

A minor miracle on multiple levels, from the Kickstarter campaign that funded it to the oh-so-delicate way the film creeps up on you...

It's both soaringly romantic and truly sad.

Kaufman and Johnson tease out the possible causes and effects of Michael's crisis with great imagination...

The sad and stingingly painful “Anomalisa,” a beautiful big-screen whatsit, features a throng of whiners, malcontents and depressives along with one bright soul who hasn’t let disappointment break her.

A movie with wit to burn and enough incidental touches that the total achievement feels immense.

Filtered through Kaufman's searching mind and soulful brilliance, the result is a masterpiece.

Charlie Kaufman is back. It's good to hear his voice.

A wonderfully odd consideration of those questions about love, pain, solitude and human connection we all ask...

Gently rolls over you like a wave, enveloping you into its world and staying with you long after.