Are We Officially Dating? 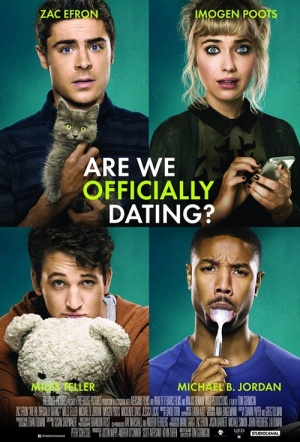 R-rated metro rom-com starring Zac Efron as one of a group of three commitment-phobe friends, each caught in their own dating limbo. Co-stars Michael B. Jordan (Chronicle), Miles Teller (The Spectacular Now) and Imogen Poots (Fright Night). Released under the title That Awkward Moment in the US.

When Mikey (Jordan) breaks the news to his two buds that his partner left him, the boys attempt to cheer him up by making a pact to hit the town as swingin’ singles. While Mikey buries his sorrows in a tub of ice cream, Jason (Efron) hits it off with Ellie and Daniel (Teller) hooks up with Chelsea. But what was intended as one-night stands quickly turn into something more, leading to the eternally awkward, titular question.

Are We Officially Dating? / Reviews

After a night of vigorous coitus, Imogen Poots’ Ellie giggles resentment for not having made Zac Efron’s Jason wait longer for sex. He replies with “I was going to make you wait too. But then I realised, I’m a dude.” With that, we get a solid idea on the film’s perspective on modern masculinity, with characters not above lying and manipulation in order to “punch a card”. That quality makes them ideally suited to committing to stay single alongside a pal who’s suddenly split from his wife.

The pic falls well short of its efforts to combine the raucous vulgarity of the “Hangover” movies with Cameron Crowe-ish depth of feeling.

Gormican’s script is the film’s big strength; the dialogue fizzes while the set-pieces pay off handsomely

The actors – who seem to have been involved in a hideous industrial accident that’s left them with the superpower of repelling all comic timing – are spectacularly unfunny.

In the main, it's the usual story – much more rom than com.

First-time writer-director Tom Gormican fills his script with jabs at romantic convention, but his story doesn’t attempt to subvert those conventions in any meaningful way.

In smaller, sharper doses, the frenetic testosterone shtick of these baby-faced blusterers might have worked better.

Are We Officially Dating? / Trailers