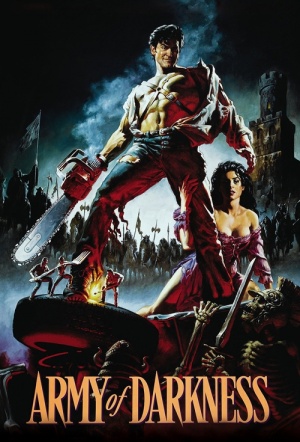 The third and final chapter of director Sam Raimi's Evil Dead trilogy, immediately following the events of the second film with our hero, Ash (Bruce Campbell), being sucked into a vortex which transports him to Medieval England.

Initially perceived as a spy by the occupants of a royal castle under siege from the dark forces of the Deadites, he soon proves himself to the locals and is hailed as the deliverer of the Necronomicon, an ancient tome with the power to ward off the evil onslaught and the potential to return Ash to his own time.