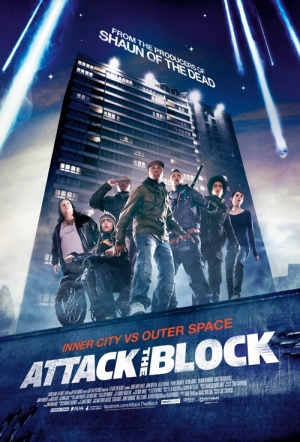 British sci-fi horror about a teen gang in South London defending their block from an alien invasion. Remeniscent of 80s horror films like Gremlins, with the splatter of Peter Jackson's Brain Dead.

This is the feature debut from director Joe Cornish, who co-wrote The Adventures of Tintin: Secret of the Unicorn. Executive produced by Edgar Wright (Hot Fuzz, Shaun of the Dead) and featuring a score by Basement Jaxx.

After the self-consciously epic, po-faced stylings of Skyline and Battle: Los Angeles, Block sticks it to E.T. with a bracing blast of teen spirit.

It’s the movie Super 8 wanted to be—or should have been.

It's a doozy, offering tight and imaginative camerawork, electric thrills, and a sharp, twisty script that plays like a social satire.

A canny blend of jokes and jitters.

This movie wants and needs to come at you like a beast in the dark. Allow it.

An entertaining thriller in the tradition of 1970s B-action films, with an unknown cast, energetic special effects and great energy.

There's a vaguely Spielbergian quality to Cornish's skill at balancing the sense of shared adventure with genuine danger.

There could be a few more scares and laughs, but it's a blast to be drawn into this urban ecosystem.

Has a clever script and winning underdog spirit.