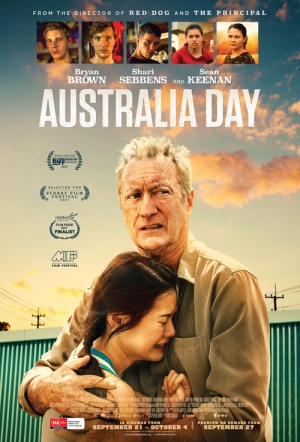 "April (Miah Madden) is a 14-year-old Indigenous teen fleeing from a car crash. 17-year-old Iranian boy Sami (Elias Anton) is running from a crime he didn't commit. Lan (Jenny Wu), from China, is escaping sexual slavery. Elsewhere there's Sonya (Shari Sebbens, The Sapphires), an Indigenous cop wracked by guilt, and Terry (Brown), a cattle farmer who's just lost everything. Stephen M. Irwin's even-handed screenplay doesn't shy away from exposing intolerance and prejudice across the spectrum of Australian society. The propulsive direction of Stenders drives the intertwined stories to a suspenseful and exciting conclusion. Australia Day has much to say about the present state and potential future shape of the nation." (Sydney Film Fest)

It holds a mirror up to contemporary Australian society and offers those unfamiliar with its tensions a relatively factual dramatic experience.

A story with plenty of sparks and no fire.

Brown is good. So is Anton, whose Sami has to deal with the script's most polemic chunk of dialogue. But, like Sebbens and Madden, they're both stifled by the earnestness that hangs over the film like a shroud.

There's little that's subtle about that combination of elements, nor about director Kriv Stenders and writer Stephen M. Irwin's exploration of the attitudes that both bind and divide contemporary Australia.

Initially, the story is carried along by the momentum of its characters. But when they run out of steam, so does the screenplay.

A big, broiling stew of complex thought, Australia Day is a provocative, intelligent film that dares to pick, probe and ask a lot of burning questions.