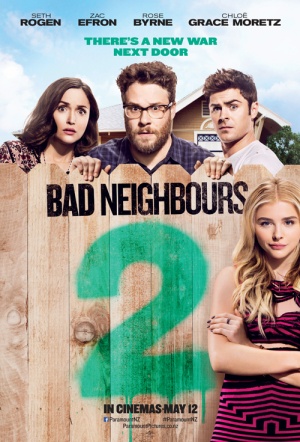 Now that Mac (Rogen) and Kelly (Byrne) have a second baby on the way, they are ready to make the final move into adulthood: the suburbs. But just as they thought they'd reclaimed the neighborhood and were safe to sell, the new sorority move in. To get rid of them, they enlist their besties (Ike Barinholtz and Carla Gallo) and the only person they know who may able to relate to young people: Teddy (Efron).

In 2014’s surprisingly side-splitting Bad Neighbours, Seth Rogen and Rose Byrne found parenthood at odds with the lifestyle of the frat house next door. Since then, a generation gap has emerged, one which even sees the couple’s former nemesis Zac Efron considered one of the ‘old people’ by the young sorority setting up shop on the property he once lorded over. That’s something that speaks to the swift cycles of college turnover, and allows the sequel to focus on the rights of young women to party hard - but safe from awful dudes.

Has a knowingly conflicted engagement with millennial-generation feminism that freshens its outlook even as it unevenly rejigs many of its predecessor's gags.

Just funny enough to not feel like a retread.

Like most comedy sequels, it’s also content to dig out the same old punchbowl and dilute the dregs.

Has some decent material and amiable bad taste, heavily diluted with gallons of very ordinary sequel product: more of the same.

In their awkward attempt to shoehorn these kids into the first pic's formula, Stoller and his writing collaborators care far less about creating believable characters than getting to the next laugh.