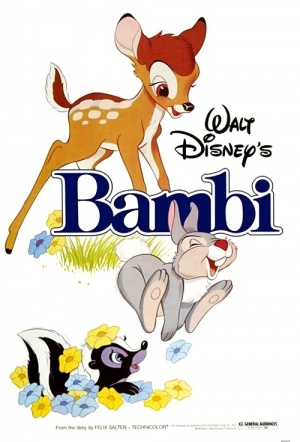 Walt Disney’s 1942 animated coming-of-age tale about the adventures of young deer and his forest dwelling pals. Named the third best animated film ever by the American Film Institute in 2008.

Bambi is a newborn fawn, destined to become Prince of the forest. Guided by his caring mother, his rabbit pal Thumper and a cute skunk named Flower, he slowly learns the ways of nature. When Bambi suffers a tragic loss, he begins to discover the courage and bravery within, just like his great stag father.

Bambi, Disney's fifth full-length animated movie, was initially panned by many critics as being too realistic to be fun, too terrifying for children, and un-American for its depiction of human hunters as villains. The criticism hasn't stood the test of time however, unlike the film which has long been a treasured family classic.

The glow and texture of the Disney brush reach new heights, especially in the treatment of a summer thunderstorm and a raging snowstorm.

For the first time, Disney has done his backgrounds in oils instead of watercolors. The result is striking.

In colors that would surprise even the spectrum itself, Disney's cartoon craftsmen have re-created a woodland that shimmers and glows and darkens altogether magically.

The fun and fear, the silliness and heartbreak, are taken to vivid extremes by Walt's entwining of high art and what snobs will always deride as Disney-kitsch.