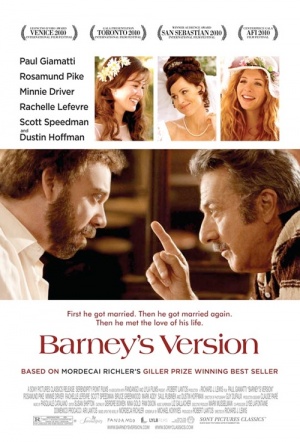 A candid confessional, the film spans three decades and two continents, taking us on a tour-de-force of Barney's passions and unusual history. There is his first wife (Rachelle Lefevre, Twilight), a flame-haired, flagrantly unfaithful free sprit with whom Barney briefly lives la vie de Boheme in Rome. The Second Mrs. Panofsky (Driver) is a wealthy Jewish Princess who shops and talks incessantly, barely noticing that Barney is not listening. And it's at their wedding that Barney meets, and starts pursuing, Miriam (Pike), his third wife, the mother of his two children, and his true love. Hoffman is Barney's sidekick and father, Izzy.

Without having read Mordecai Richler’s 1997 novel which Barney’s Version is adapted from, it’s still abundantly clear that this long, glossily mounted tearjerker exhibits all the usual problems with paring down 400 pages into an orderly feature film.

The life of a guy who constantly screws up could be a downer. But Barney’s Version is a heart-toasting pleasure thanks not least to a trio of engrossing performances.

Giamatti's performance is one of those achievements. He is making a career of playing unremarkable but memorable men.

Whatever the film's flaws, and like its protagonist, there are times when things get a bit out of control, watching Giamatti use Barney to wrestle with success, failure, friendship, love and increasingly with time is exhilarating.

Highly entertaining and arguably the most satisfying Richler screen adaptation to date.

While perhaps a touch overlong and with plot strands that don't hang together as well as they might, this is remains a triumph, illuminated by a terrific leading man turn from Paul Giamatti.

The film, lacking narration or much explanation of the character, is an outsider's version rather than his own. It's intriguing, but almost always frustrating.