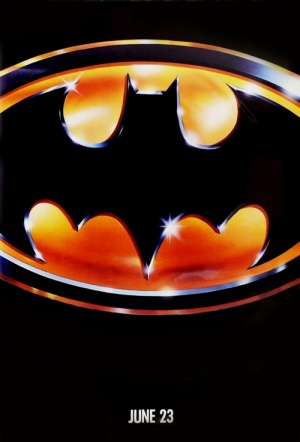 The Dark Knight’s 1989 feature film debut, directed by Tim Burton and telling the story of Bruce Wayne’s battle against his greatest rival: The Joker. Stars Michael Keaton, Jack Nicholson and Kim Basinger with a soundtrack by Prince.

Living in the dark, corrupted, gangster-run metropolis of Gotham City, billionaire Bruce Wayne (Keaton) takes it upon himself to make the streets safe again. Disguised as a bat, he injects fear into the criminal underworld, tailed by curious reporter Vicki Vale (Basinger). However, Gotham’s newest protector attracts the attention of the maniacally homicidal Joker (Nicholson).

The hype around Batman’s cinematic debut was so high that the promotional material for it needed no taglines or titles, simply the iconic Batman symbol and the release date. It went on to become the first film ever to earn $US 100 million in its first ten days of release, and was the highest grossing film based on a DC comics character until 2008's The Dark Knight.

Tim Burton effectively echoes the visual style of the original Bob Kane comics while conjuring up a nightmarish world of his own.

Meanders mindlessly from one image to the next, as does a comic book. It doesn't help that the title character remains such a wimp even when played by Michael Keaton.

A triumph of design over story, style over substance - a great-looking movie with a plot you can't care much about.

The movie that gave birth to the summer blockbuster remains impressive.