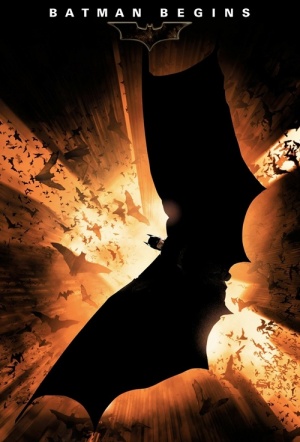 Christian Bale is billionaire Bruce Wayne, transforming himself into a self-made symbol of justice in this first film of Christopher Nolan's gritty Dark Knight trilogy. Wayne's butler Alfred is played by Michael Caine, his childhood sweetheart Rachel by Katie Holmes.

In the wake of his parents' murder, a troubled Wayne travels the world seeking the means to fight injustice and turn fear against those who prey on the fearful. After learning the ways of the ninja with the League of Shadows and mentors Ducard (Liam Neeson) and Ra's Al Ghul (Ken Watanabe), he returns to Gotham to unveil the Batman. There, he faces the Scarecrow (Cillian Murphy) and the League's ultimate plot to bring Gotham City to its knees.

A departure from the camp of Joel Schumacher's mid-'90s Batman movies and Tim Burton's earlier pop surrealism, Nolan's darker, noirish tone made for a critical and commercial success. The film begins a trilogy completed with The Dark Knight (2008) and The Dark Knight Rises (2012).

There is talent and cleverness here, but not much excitement.

Amazing. Batman Begins may even be the greatest superhero movie ever made. Thought Spider-Man was the modern pinnacle? Think again.

What makes this Batman so enjoyable is how the director Christopher Nolan arranges familiar genre elements in new, unforeseen ways.

At last penetrates to the dark and troubled depths of the Batman legend.

This is a film noir Batman, a brooding, disturbing piece of work that starts slowly but ends up crafting a world that just might haunt your dreams.

Significantly grittier than previous Bat-beginnings... In a year when the franchise watchword is "dark", this delivers the full noir with a side order of dementia.

A bold and brilliant superhero movie.