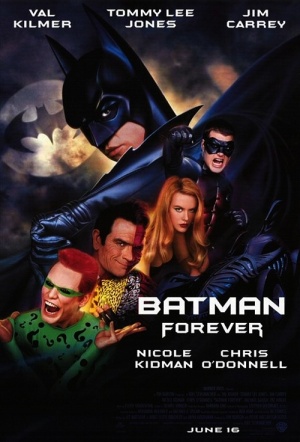 A deadly alliance has formed between two of Gotham’s most dangerous criminals: the menacingly polarising Two-Face (Jones) and the manic computer genius Riddler (Carrey). Bruce Wayne (Kilmer) dons the bat suit again - infamously now sporting rubber nipples -  in order to put an end to the duo’s chaotic reign on the city. This time, Batman is aided by Dick Grayson (O’Donnell), an acrobat who sides with The Dark Knight as Robin.

As for Kilmer, he gamely steps into the dual Batman/Wayne role but can't get much traction, finding, as Michael Keaton had, that beyond a stern jaw there's not much to be done with it, since the suit does most of the work.

The film recovers from that initial confusion to get stronger as it goes along, and to shape up as a free-form playground for its various masquerading stars.

It's great bubble gum for the eyes.

This loud and boisterous comic book confidential is serviceable enough to satisfy.