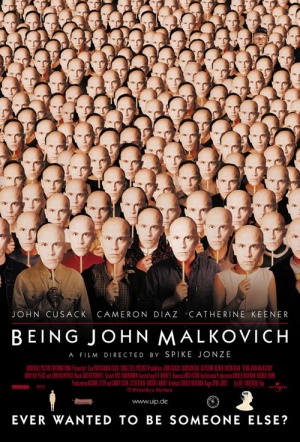 A puppeteer (John Cusack) discovers a portal that leads, literally, into the head of film star John Malkovich in this mind-bending comedy from director Spike Jonze (Adaptation) and writer Charlie Kaufman (Eternal Sunshine of a Spotless Mind).

Craig (Cusack) takes a job as a filing clerk as his puppeteer career lags. One day he accidentally discovers a door, a portal into the brain of Malkovich (played by Malkovich himself). For 15 minutes, he experiences the ultimate head trip - he is John Malkovich. At least, he controls the body of John Malkovich. With his beautiful office mate Maxine (Catherine Keener) and his pet-obsessed wife (Cameron Diaz), they hatch a plan to let others into John's brain for $200 a pop.

A smart, unusual film that will get into your head.

The intense invention and creativity at work in this extraordinary movie is overwhelming.

This outrageous comic fantasy may not sustain its brilliance throughout its 112 minutes, but it keeps cooking for so much of that time that I don't have many complaints.

Devilishly inventive and so far out there it's almost off the scale.

An incredibly rich and entertaining (not to say, laudably malevolent) film that far transcends its already way-out title premise.

It's tremendously entertaining, and probably worthy of repeat viewings.

Being John Malkovich, which contains not a frame of extraneous footage, is more than a must-see movie: It's a must-see-more-than-once event.

Weird to the max... and revved up with cruel wit and brazen imagination, Being John Malkovich is a dark movie comedy that you couldn't forget if you tried.

It jumps off the screen with the kind of freshness, originality, and light-handed stranglehold on the Zeitgeist that moves movies forward.

Mr. Jonze's film, with a terrific original screenplay by Charlie Kaufman, is not the first to explore the prospect of being able to sneak into the mind of another person. But (it) is definitely the most fun.

The movie has ideas enough for half a dozen films, but Jonze and his cast handle them so surely that we never feel hard-pressed; we're enchanted by one development after the next.

You just have to marvel at how well Jonze and... Kaufman keep the whole thing from strangling on its own eccentricity.