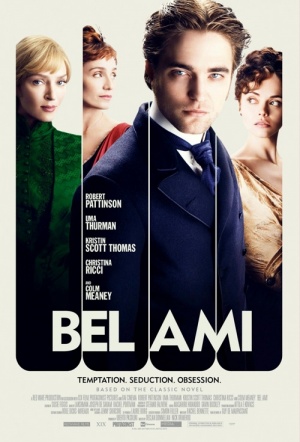 Robert Pattinson stars in this period drama about a young Parisian who rises to power via manipulation of the city's most influential and wealthy women. Based on Guy de Maupassant's 1885 novel, co-starring Uma Thurman, Christina Ricci and Kristin Scott Thomas.

Georges Duroy (Pattison) travels through 1890s Paris, from cockroach ridden garrets to opulent salons, using his wits and powers of seduction to rise from poverty to wealth, from a prostitute’s embrace to passionate trysts with wealthy beauties, in a world where politics and media jostle for influence, where sex is power and celebrity an obsession.

There are few stories I relish as much as those that centre around some sort of societal ascension. There's something quite delicious about watching a character weave around his or her class status to infiltrate a rarefied arena, only to inevitably become a victim of its corruptive influence.

A good-looking yet curiously tame adaptation that showcases Pattinson's ambition if not his full abilities.

Although this is potentially juicy stuff, it is as dry and tasteless as a shrunken piece of fruit left in the refrigerator far too long.

Robert Pattinson has to do an awful lot of hollow-eyed smouldering in this hammily enunciated French period drama.

[Patterson] successfully seduces three of the most powerful beauties in Paris society despite having no talent, no money and no conversation.

Intriguing political aspects of the story would have more resonance if the human drama had more heft.

Too reliant on lavish costumes, heaving bosoms and all the other trappings of the period drama.

Even with a strong cast to gild its endless chambers and salons, there's barely a spark of soul to fuel its story. Pattinson is no Malkovich either.

This new Bel Ami has a lot to recommend it, but it never seems as artful or smart as Dangerous Liaisons, the film it most resembles.