It is frustrating when a film has all the ingredients to be brilliant but ends up just a good movie. The story of Billy Lynn’s Long Halftime Walk (2016) is an original and painfully satirical study of post-traumatic stress disorder (PTSD). It is also a film limited by all-too-obvious visual messages and clichéd one-liners that reduce a possible artwork to an emotionally tame and uneven film.

The story unfolds over a single day in America with flashbacks to a live combat incident in Iraq. A news clip goes viral when young army specialist Billy Lynn (Joe Alwyn) is filmed trying to save the life of his sergeant. His Bravo squad are celebrated as heroes and given a two-week promotional tour across America to boost dwindling support for the war. The tour highlight is an appearance in a glitzy halftime show at a Dallas Cowboys game. They are ushered around like a troupe of performing monkeys with little regard for what they have been through or how glaring theatrics might affect soldiers coming straight out of battle. Meanwhile, their tour guide is trying to stitch up a film deal with the tightwad team owner (played by Steve Martin) as virgin Billy falls for a cheerleader (Mackenzie Leigh) who loves war heroes.

The storyline bears little resemblance to the typical war genre film, but this one is not about guns, bombs and bodies. Filmed in ultra-high definition with extensive shallow depth of field, Billy and the squad are often in pin-sharp focus against soft backgrounds, a technique that keeps them in a separate plane of existence to the crassly insensitive stage onto which they have been thrust. The surreal stadium scenes are a spectacular but clichéd message about commodity wars for a public wanting to ‘make America great again’. It is hard not to empathise with Billy or feel his disorientation as he watches prancing cheerleaders and hears musical fireworks exploding all around him while he struggles with flashbacks of hand-to-hand combat in the midst of a mortar firestorm.

There is much to commend in this film. Young Joe Alwyn plays a complex role with nuance beyond his experience. The cinematography is vivid (almost to the point of distraction), and the pace and casting is strong (although comic Steve Martin seems out of place). A lighter directorial hand may have produced a more naturally flowing story without the corny melodrama and trite one-liners like “that day no longer belongs to you…its America’s story now” or “we’re a nation of children who fight in other countries to grow up”. But you will long remember that stadium extravaganza as an echo-chamber for the horrors of PTSD. For that alone, this film is worth seeing.
0 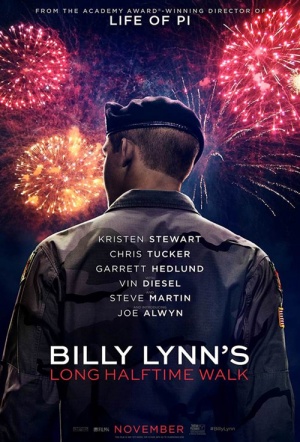