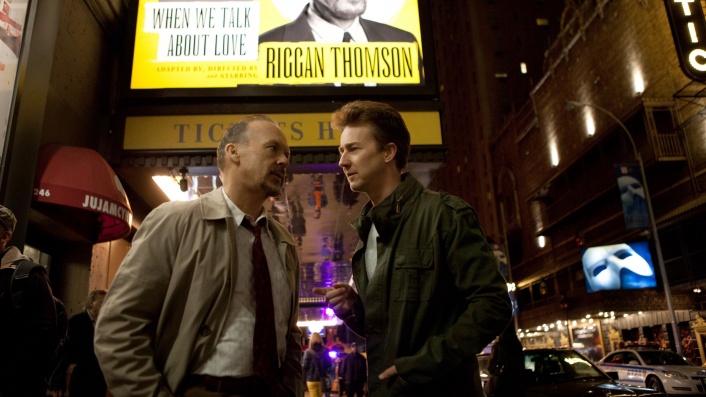 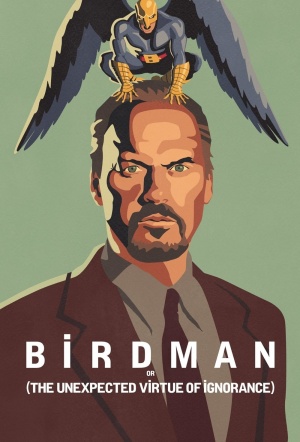 Michael Keaton (Batman) claimed a Golden Globe as the lead in this black comedy, from the director of 21 Grams, as a washed-up actor – known for portraying iconic superhero Birdman. Winner of four Academy Awards including Best Film and Director. Co-stars Emma Stone, Edward Norton, Naomi Watts and Zach Galifianakis.

Riggan Thomson (Keaton) starred in two Birdman movies before quitting and hitting career doldrums. His solution some two decades later is to adapt, direct, and star in a Broadway play based on a Raymond Carver short story. For this gamble to pay off, Thomson will have to deal with an impossibly difficult method actor co-star (Norton), an insecure actress (Watts), his current girlfriend (Riseborough), and recovering addict daughter (Stone). Not to mention the voice of Birdman, present in his most vulnerable moments to chip away at Thomson's ego, and offer generally unhelpful advice.

It's very rare you find a film unlike any you've ever seen before, but Birdman, co-written and directed by Alejandro González Iñárritu (Biutiful, Babel) more than fits the bill. You could describe it as Magnolia crossed with Black Swan. Or Rope meets The Player. Or Sunset Boulevard via Crank. You could call it anything, in fact, and you'd barely get close. If you like the sound of just one of these mangled correlatives, stop reading now. To be surprised at the cinema is the rarest of treats.

A triumph on every creative level, from casting to execution.

A funny, frenetic, buoyant and rambunctiously showboating entertainment in which Mr. Iñárritu himself rises high and then higher still.

At certain moments, watching it felt like inhaling laughing gas mixed with helium.

Iñárritu is a pretentious fraud, but it’s taken some time to understand the precise nature of his fraudulence.