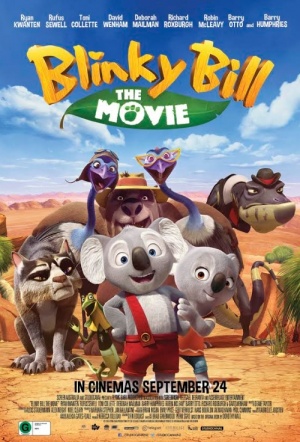 Australia's iconic koala Blinky Bill gets a modern animated movie, rendered with CGI and featuring the voices of Toni Collette (The Way, Way Back) and Ryan Kwanten (TV's True Blood).

The Blinky Bill character was created in 1933 by New Zealand-born Australian author and illustrator Dorothy Wall. Her classic children's books have been adapted previously to TV (a live-action/puppet series in the 1980s and an animated series in the '90s) and cinema (with 1992's Blinky Bill: The Mischievous Koala).

Blinky Bill is a step back in time in more ways than one. The character stems from a 1930s book series, made famous once more in the 80s by an ABC TV series and then a feature film in 1992.

Plays out predictably but with good humour as it leads into the climactic finish alongside of hungry crocodiles, a sleepy parrot and a flying contraption with emus and a hyperactive lizard.

It's refreshing to see an Australian movie so heart-on-sleeve about expressing national character.

Suffers from limitations of a relatively low budget, but highlights are found in its action sequences.

There's something very organic and well, authentically Ocker about this Australian answer to Rango.

Cringeworthy in almost every way.

Hey kids! If your parents reveal plans to put you anywhere near Blinky Bill the Movie this school holidays, you are quite within your rights to ask why you are being punished in this way.