Review: Blue Is the Warmest Colour

Blue is the Warmest Colour

Winner of the Palme D'or at the Cannes Film Festival last year, receiving universal acclaim and appearing on many critics top 10 lists. Blue is the Warmest Colour is one of the most powerful and captivating love stories I've ever seen. Adele Exarchopoulos & Lea Seydoux give sublime performances as Adele & Emma. Adele, played by Exarchopoulos, a teenage girl discovering she has feeling for other women, and Emma, played by Seydoux, an older lesbian with blue hair who begins a relationship with Adele. Many scenes are shot with close ups on the actors faces. Controversial for it's explicit sexual content, Blue is the Warmest Colour has an extremely graphic 12 minute NC-17 lesbian sex scene. Sex is necessary in a romance, But it was just so excessive and it felt gratuitous after several minutes. Blue is the Warmest Colour is undeniably impressive. And while maybe not quite the masterpiece it was hyped up to be, this is a challenging yet rewarding experience that cinema lovers shouldn't miss. 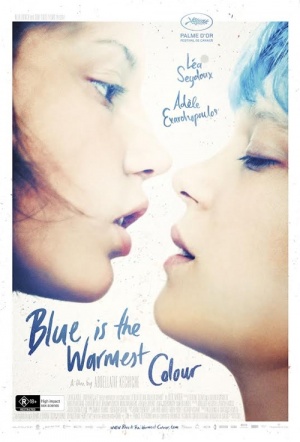 Blue Is the Warmest Colour