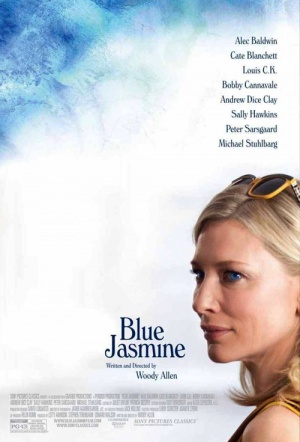 Woody Allen comedy/drama starring Cate Blanchett (who won a Golden Globe, a BAFTA and a Best Actress Oscar for the role) as a fashionable New York socialite and housewife in the midst of an acute crisis after she loses her husband and fortune. Also stars Alec Baldwin, comedians Andrew Dice Clay and Louis C.K., Peter Sarsgaard and Sally Hawkins.

Jasmine (Blanchett) has it all, thanks to her marriage to multimillionaire Hal (Baldwin). But trouble within their relationship leads to financial disaster when Hal is revealed as a crook and soon Jasmine finds herself not only broke but isolated from her family - who she treated with disdain from her lofty New York pedestal. Moving into the unassuming San Francisco apartment of her sister Ginger (Hawkins), whose lottery winnings shared with ex-husband Augie (Clay) were lost by Hal, Jasmine attempts to rebuild her life.

“I fell in love with the name Jasmine,” declares Alec Baldwin’s Hal at a glittery Park Avenue dinner party. Jasmine (Cate Blanchett), whose real name is actually Jeanette, is the ultimate wisteria girl, a beautiful social climber who has fashioned herself into a diamond-dripping society wife. Her name isn’t the only fabrication. Hal’s fortune is built on lies and crumbles Bernie Madoff-style into ruin, leaving Hal in jail and Jasmine in hell, seeking shelter in San Francisco with her grocery-packer adopted sister (Sally Hawkins).

Cate Blanchett plays a neurotic Woody Allen heroine for the ages in this serious-minded but ruefully funny work.

The one-liners are in evidence but this is more abrasive than you might expect.

It’s real Streetcar Named Desire territory as the fights pile up, and if you think that doesn’t sound entertaining, know that it is, in a hypnotically catastrophic way.

This lost, lonely woman [is] brilliantly brought to quivering life by Ms. Blanchett... Allen's movie, his most sustained, satisfying and resonant film since Match Point.

For all the memorable dialogue and elegant camerawork (courtesy of Javier Aguirresarobe), it’s Blanchett’s movie, and her performance tells yet another story, that of a woman losing control.

Although marred by a couple of too-convenient plot contrivances, this often humorous drama lands firmly in the plus column among the Woodman's recent works.

Astute, humane and shot through with keen observations on the state of the world.