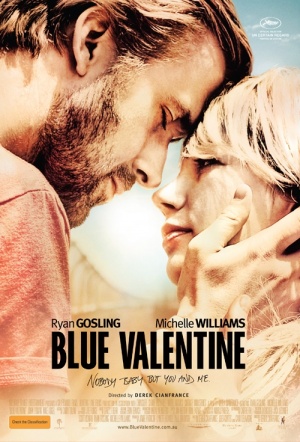 Ryan Gosling and Michelle Williams star in this romantic-drama, a portrait of a disintegrating marriage. Unfolding like a mystery, the film cross-cuts between time periods to reveal the evolution of their relationship.

On the far side of a once-passionate romance, Cindy (Williams) and Dean (Gosling) are married with a young daughter. Problems with the marriage centre around Cindy's ambition, juxtaposed to Dean's contentment to focus on his wife and child.

On balance, this is a meaty, strongly realized dramatic work of considerable accomplishment.

A raw slog through one couple’s marital misery, but make no mistake: the combined talents of its stars will rip your heart out.

Cindy and Dean remain, for all their sustained agony and flickering joy, something less than completely realized human beings. Mr. Cianfrance's ingenious chronological gimmick, coupled with his anxious, clumsy plotting, leaves them without enough oxygen to burst into breathing, loving life.

Derek Cianfrance, the film's writer and director, observes with great exactitude the birth and decay of a relationship. This film is alive in its details.

Two brilliant actors in search of a story

A raw but beautiful picture of love uniting and dividing: tender, real and heartfelt.

Michelle Williams and Ryan Gosling are breathtaking in this enormously watchable and compassionate film.