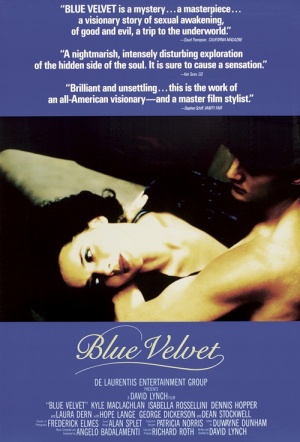 "Lynch's modern masterpiece is obsessed with the strangeness that hides in the nooks and crannies of suburban America... What makes Blue Velvet so special, though, is the way in which Lynch turns this simple set-up into a psychosexual drama that would make even Freud shake his head in disbelief. Jeffrey and Sandy (Laura Dern) are babes in the woods who stumble into the very adult world of nightclub singer Dorothy (Isabella Rossellini) and her torturer-lover Frank (Dennis Hopper) – the big bad wolf in this Grimm fairy tale. What they witness is something that their mom and apple pie family life has never prepared them for – S/M, kidnapping, murder, and various sexual perversions." (BBC)

As fascinating as it is freakish. It confirms Mr. Lynch's stature as an innovator, a superb technician, and someone best not encountered in a dak alley.

So strong, so shocking and yet so audacious that people walk out shaking their heads; they don't know quite what to make of it.

The most brilliantly disturbing film ever to have its roots in small-town American life.