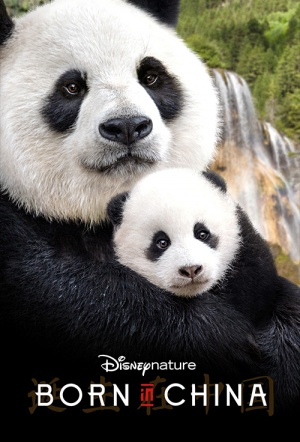 "In an epic tale of four seasons, we follow some of the animal families that populate various corners of China’s expansive terrain. Meet Ya Ya, a loving panda bear mother guiding her growing baby Mei Mei as she begins to explore and seek independence; Tao Tao, a mischievous two-year-old golden snub-nosed monkey nudged toward self-sufficiency after the arrival of his new baby sister; and Dawa, a mother snow leopard – an elusive animal rarely caught on camera – facing the very real drama of raising her two cubs in one of the harshest and most unforgiving environments on the planet." (New Zealand International Film Festival)

A gently stirring doc about pandas, snow leopards, and golden monkeys in the China wilds traces the circle of life - and death.

As an introduction for children to exotic creatures in picturesque landscapes, the movie is harmless enough.

It's neatly organised around not only the changing of the seasons, but a Disney-branded circle-of-life ethos.

This Disneynature documentary boasts an immersive, meditative tone which is undermined by aggressive adorableness that seeks to anthropomorphise its untamed creatures until they're as harmless as moppets.

John Krasinski narrates, and though he doesn't achieve that mix of gravitas and cheeky wit [of] Sir David Attenborough ... his vocal stylings are perfectly homey and serviceable for the task of guiding us through the lives of these special animals.

If all of the over-emoting can be ignored, Born in China delivers gorgeous visuals in its close-up perspective on some of the world's rarest wildlife species, as well as the imposing habitats they call home.