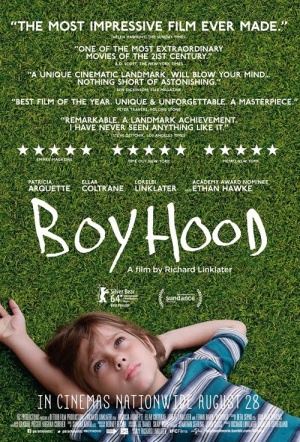 Longitudinal, observational coming-of-age drama from Richard Linklater (Dazed and Confused), claiming Best Director and Best Film (Drama) at the 2015 Golden Globes. The movie was made over 12 years, filmed in annual periods, watching the boy (Ellar Coltrane) - as well as co-stars Ethan Hawke and Patricia Arquette (who won the Oscar, BAFTA and Golden Globe for her supporting role) - age and change. Hawke described the unique production as "timelapse photography of a human being".

Opens with dreamy-eyed grade-schooler Mason (Coltrane) facing upheaval: his devoted, struggling single mom Olivia (Arquette) has decided to move him and older sister Samantha (Lorelei Linklater) to Houston just as their long-absent father Mason Sr. (Hawke) returns from Alaska. Through a tide of parents and stepparents, girls, teachers and bosses, dangers, yearnings and creative passions, Mason emerges to head down his own road.

Ethan Hawke explained the ambitious project in 2013: "Linklater and I have made a short film every year for the last 11 years, one more to go, that follows the development of a young boy. I play the father, and it's Tolstoy-esque in scope. I thought the Before series was the most unique thing I would ever be a part of, but Rick has engaged me in something even more strange. Doing a scene with a young boy at the age of seven when he talks about why raccoons die, and at the age of 12 when he talks about video games, and 17 when he asks me about girls, and have it be the same actor - to watch his voice and body morph - it's a little bit like timelapse photography of a human being."

Boyhood is a staggering cinematic achievement, all the more so in how readily you’ll lose yourself in this broadly sketched tale of a life rather than pick apart how it has been uniquely assembled. For twelve years Richard Linklater has been shooting episodically, striking gold all over the place in the process – most notably in the form of Ellar Coltrane, whose lead performance as Mason is what this ambitious project hinges upon.

There's a rough-edged, organic quality that recalls the work of those European helmers Linklater so admires: Fassbinder, Bergman, Bresson.

Extraordinary in form, ‘ordinary’ in content... ambitious, intimate and unforgettable. It might just be the apex of Linklater’s life’s work.

Unshakable, witty and deeply felt, the film will be paying emotional dividends for a long, long time.

These are people you know, maybe people like you.

What an astonishing achievement; what a beautiful movie.

Perhaps never has the long arc of the journey from childhood to college been portrayed as cohesively and convincingly... can be plain on a moment-to-moment basis but is something quite special in its entirety.

An extraordinary achievement — tender, funny, wise and wistful, full of warmth and humanity.