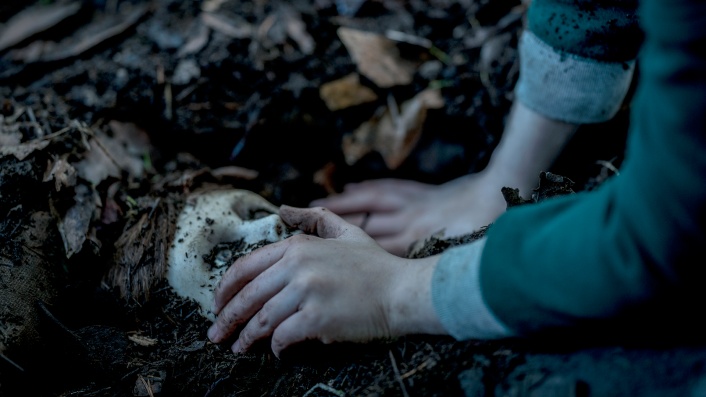 An above-par Horror movie which dwells on more than just suspense and overused clichés. With top-notch acting by Katie Holmes and Ralph Ineson, this movie raises the standards of contemporary Horror movies with a certain level of intellectual investment in choreography rather than just the visual aspects.

I found myself dumbstruck by the introductory scenes of this movie, thinking to myself if the violent burglary scene was necessary. I realised it not only added another layer of complexity to this movie but helps drive the narrative in a psychological level. With a serious head injury sustained during the burglary we can't help but speculate the level of psychological stability within the mother (Liza) as she grows more anxious and speculative of her son's (Jude's) new doll friend (Brahm). Additionally, Jude's traumatic experience of witnessing the injury to his mother has left him traumatised with an inability to speak.

As Jude grows more uncomfortably close to Brahm Liza begins progressively descending into a void of disillusionment as she frustratingly tries to piece out whether the disturbing situations are projected adversely as a result of her head injury, a defensive mechanism for her son's trauma, or something more paranormal in nature. I was deeply invested in this particular narrative as Katie Holmes depicted the complexities of her character with finesse, infusing multiple layers, such as motherhood, paranoia, suspicion and defensiveness, into a stand-out performance. One particular scene (the dinner scene) sticks out where her paranoid state is excellently demonstrated. At one point, her own husband's disbelief of her drives tension to new heights of unsettling confrontation. It may not be as perfect as Toni Collette's performance in Hereditary (2018) but definitely hits the right notes.

This film perfectly balances paranormal interactions with psychological justifications as Jude's Psychologist continually establishes the doll as a 'security blanket' for Jude which enables him to regain his speech and to deal with his past trauma. As his relationship strengthens with the doll he dresses and assumes a Damien-like appearance from the Omen movie. At the same time, this film succeeds in delivering terror through the words that Jude writes and their perfect timing.

The doll may be comparable to Chucky (from Child's Play) but succeeds in propounding horror with a more unsettling mood with its perfected mannerisms, its deeply haunting eyes and its striking simplicity. With minimal motions and expressionlessness Brahms elevates its threat level through psychologically penetrating its victim with fear and forcing itself into Jude's personal space at all times. It's demonic possessiveness of Jude is something that is visually disturbing and terror-inducing as Jude seems progressively helpless and unable to reintegrate with his parents as the initial 'security blanket'.

Ultimately, Brahm, similar to the composer Johannes Brahm, becomes a perfectionist in his own artform of manipulation, using little force to interject himself into Jude's fragile psyche. As the composer (Johannes) believed in originality and destroyed some of his work to avoid replicability, so did Brahm methodically in avoiding exposing the method of his functionality, consistently playing 'mind games' with Liza and making her question her own sanity.

This film did a good job in establishing an environment of earlier times, maintaining a sense of Gothic influence and utilising an unsettling musical score that is composed throughout this movie. The focus on natural scenery and simplified cinematography breathes new life for this movie, which could otherwise be spoiled with clichéd and absurdist, contemporary Horror elements.

Despite Ralph Ineson's excellent performance, I felt like his character's inclusion in this movie is questionable. His character only serves as an intrusive force to the family and his involvement in the final act is very disappointing, as it dissipated my expectation for a worthy ending. It seemed like a robbed experience to realise that he too is psychologically manipulated by Brahms, as if to boldly depict his unique paranoia-driven nd unsettling performance that made him visually appreciable in the Witch (2017).

The final act seemed rushed with poor exposition and a lacklustre 'pay-out'. With the terrifyingly disturbing development of suspense and paranoia of Brahm, the ultimate exposition takes a confusing and questionable direction. It seemed like I, as the viewer, was robbed of that impressive final act that I was expecting. It felt like a poorly choreographed and digitally-modified sequence of absurdity and lacking the psychological intelligence that was present throughout most of this movie. The ending scene only exposed the cheaply formatted continuity of Brahm's legacy, something which could be omitted instead and left open to our imagination.

There was also a sense of immaturity and childishness visible in some of the scenes which makes me undermine the sensibilities of the production team. For instance, both the parents sometimes depicted a more awkwardly immature performance which wasn't believable or conceivable in this psychological thriller. The Father (Sean), in particular, seemed monotonous with his line delivery and failed to elicit feelings of fatherhood. Alternatively, the extended the bullying scene with the uncle's son was laughable with a lack of seriousness on the bully's part. As a result, his sustained injury didn't elicit a response from me as the build up to this gory scene was mishandled and poorly choreographed.

Nevertheless, this movie succeeds in exploring multiple layers of one's own psyche and trauma-induced attachments, which elevates this movie above mediocre and cliched Horror films by focussing on the disturbed and fragile attachment we may sometime establish with unconventional ideas/ items. With an accurate depiction of psychological dependency this movie excels in portraying more than just contemporary horror as the character development equally propagated different styles of terror.