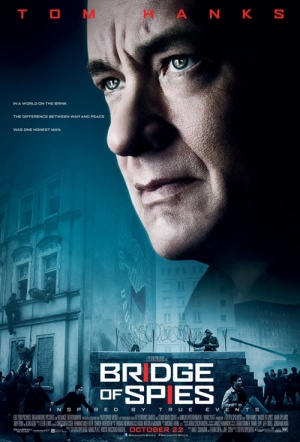 Steven Spielberg directs this Cold War spy drama, co-written by the Coen brothers. Tom Hanks is a Brooklyn lawyer recruited by the CIA for a near-impossible task: negotiating the release of an American pilot detained by the Soviet Union. Based on the 1960 U-2 incident in which pilot Francis Gary Powers - who was shot down over Soviet land - was released in exchange for a captive KGB spy held under the custody of the United States.

The prospect of seeing Steven Spielberg sink his teeth into the Cold War is an enticing one indeed, but although Bridge of Spies contains a couple of tense set-pieces, it is much more focused on being a character drama than a period thriller.

A deeply satisfying Cold War spy thriller that feels more subdued than usual for the director...

A handsome and mature entertainment, rich with novelistic intrigue, that asks for very little in exchange for its rewards.

Like most of Mr. Spielberg's films, a consummate entertainment that sweeps you up with pure cinema.

Has a brassy and justified confidence in its own narrative flair.

May be a snooze to the ADD crowd allergic to historical drama, but it's dished out by experts.

A consummate professional's tribute to a gifted amateur, a smooth entertainment with a strong but subtle political subtext that's both potent and unexpected.

An absorbing true-life espionage tale very smoothly handled by old pros who know what they're doing.

Entertaining and thought provoking... gives real historical events a human face, and rates as a surprising crowd pleaser in the process.