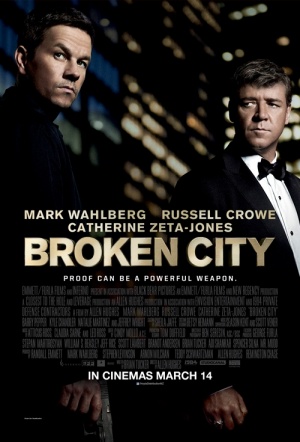 Mark Wahlberg is Billy, an ex-cop now private detective, hired by the mayor of New York City (Russell Crowe) to identify the lover of his wife (Catherine Zeta-Jones) in this hard-boiled thriller. But when the affair turns deadly, Billy's relentless pursuit of justice brings him up against the corrupt mayor's political ambitions.

This is the first solo feature from director Allen Hughes, better known as one half of directing team the Hughes brothers (alongside twin brother Albert). The pair previously partnered on The Book of Eli, From Hell, Dead Presidents and Menace II Society.

Boasting a great supporting cast and a script that featured on 2008’s Black List (the best unproduced screenplays of that year), Broken City fails to make any points about political corruption, or even tell an entertaining story. Alarm bells started ringing when every terse exchange proved chuckle worthy. Brian Tucker’s script shoots for noir-style banter but winds up a pale imitation of it, and the supposedly twisty plot is brain-numbingly straight-forward.

A so-so political potboiler that wants to be a gritty, expansive epic of moral and urban decay.

Offers star power, dashes of dazzle and plenty of movie nods. But Hughes' thriller fails to locate a life of its own.

It's stolid, it's dogged, it knows where it's going. Back and forth around the same old scenery.

Nothing clicks, nothing resonates, everything's broken.

Would have made for a fine film noir 60 years ago but feels rather contrived and unbelievable in the setting of contemporary New York.

If this ‘power corrupts’ potboiler had been made in the 1990s — with, say, Andy Garcia, Gene Hackman and Kim Basinger — it would already have felt old-fashioned.

In spite of some punchy scenes, crackling dialogue, and fine performances.