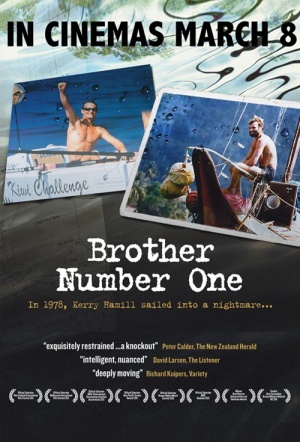 Kiwi Olympian rower Rob Hamill goes to Cambodia to retrace the events that saw his brother, Kerry, caught, tortured and murdered by the Khmer Rouge in 1978. From award-winning documentarian Annie Goldson (An Island Calling).

"In 1978, when future Kiwi Olympian and transatlantic rowing champion Rob Hamill was 14, his older brother Kerry disappeared. Two years later the family learned from a newspaper report that their gentle, joyful number one son had been identified as a victim in a Cambodian death camp. Kerry had been on board his charter yacht Foxy Lady with two other young men when they anchored in Kampuchean waters. Hippie adventurers, they were unaware of the horrors unfolding onshore. Kerry was seized and tortured for two months at the Khmer Rouge slaughterhouse Tuol Sleng (S21). After signing an outlandish confession he was executed on the orders of the infamous Comrade Duch." (NZ International Film Festival 2011)

Will move many to tears.

It takes what could be an infuriatingly political or just too sentimental subject and turns it into the definite page-turner of documentaries – something that grabs you by the throat and engages you right from the opening seconds.

Brother Number One is a necessarily hard watch, but has so much compassion and grace that the audience is not left feeling desolate by the end. Optimistically, one hopes that as people see this film, and appreciate the depths of horror inflicted upon the Cambodian people, we will be mobilised into a better way of being.

Rob Hamill is a quintessential Kiwi who could easily be your brother, husband, son or best friend, and through this medium not only do the politics become very personal; we also feel a powerful sense of being with him, step by step, on his quest. Highly recommended.

It moves, it speaks, and at its best, it entrances. You won't see many documentaries better than this, from any country, in any year.