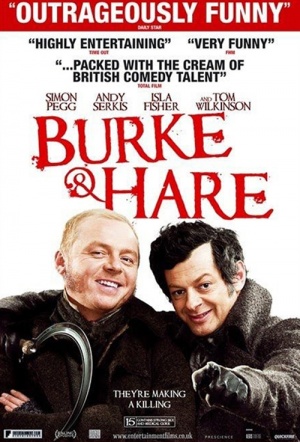 An 1820s-set black comedy based on the Burke and Hare murders. Simon Pegg and Andy Serkis star as a pair of 19th Century grave robbers who find a lucrative business providing cadavers for Edinburgh's medical fraternity.

William Burke (Simon Pegg) and William Hare (Andy Serkis, or Gollum from LOTR) are scratching out a living in 1820s Edinburgh. One day, they return to their lodging house to find that a tenant has suddenly died. As the boys decide how to dispose of the body, they discover that a corpse can fetch a hefty price: Edinburgh is the centre of the medical world and the city’s doctors are crying out for cadavers for their anatomical demonstrations. Not least, fierce rivals progressive Dr. Knox (Tom Wilkinson) and traditionalist Dr. Monro (Tim Curry).

Entrepreneurial Hare is quick to realize they’ve hit on a lucrative venture and the pair begin to arrange a series of deadly 'accidents'. Initially dodged by a guilty conscience, Burke changes his tune after meeting Ginny (Isla Fisher), a beautiful and spirited actress who’s seeking financial backing for her new play – an all female production of Macbeth. Driven on by the promise of romance, Burke agrees to step up their operation; branching out into “ethical” murder.

Where the script stumbles is in its absence of any especially funny setpieces or memorable lines.

Simon Pegg and Andy Serkis are a natural pairing for a movie about the 19th grave-robbers – but this just isn't funny or scary enough, says Peter Bradshaw

Unpleasant drivel that tries to make fun out of murder.

Against all the odds, it’s surprisingly educational about a blood-spattered page in medical history even if it whitewashes the truly despicable title duo (Hare, in particular, was one of the worst villains who ever drew breath). It’s generally entertaining, with enough funny, ingenious bits to outweigh the shit-thrown-out-of-window gags.