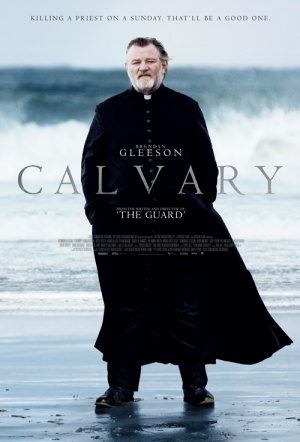 Black comedy starring Brendan Gleeson (In Bruges) as a good-natured Irish Catholic priest who, while trying to believe the best of his parishioners, is continually shocked by the spiteful and confrontational inhabitants of his small country town. Dark thoughts begin to take over when his life is threatened during confession. Co-stars fellow Irish thespians Chris O'Dowd, Dylan Moran and Kelly Reilly. From the director of The Guard, which also starred Gleeson.

Named after the site where Jesus was crucified – though set in rural Ireland – John Michael McDonagh's follow-up to The Guard manages to provoke both thought and laughter, while saying something profound about the human soul.

The film offers a mordantly funny survey of small-town iniquity that morphs, almost imperceptibly, into a deeply felt lament for a fallen world.

Anchored by a truly sensational performance from Gleeson, this unexpected blend of passion play, detective story, rural comedy and serious inquiry into faith is destined for classic status.

[A] wickedly funny black comedy, all fatalism and gallows humour, with both a beating heart and an inquiring mind lingering beneath its tough-guy bluster.

It's puckish and playful, mercurial and clever, rattling with gallows laughter as it paints a portrait of an Irish community that is at once intimate and alienated.

Calvary is gripping, moving, funny and troubling, down to an uncompromising yet uncynical finish.