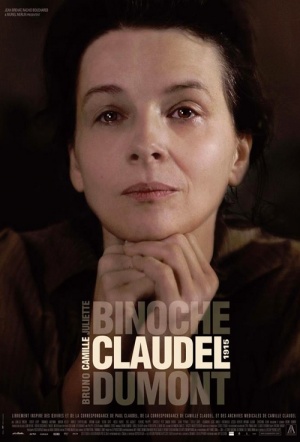 Juliette Binoche is famed French sculptress Claudel, institutionalised in an asylum at the turn of the 20th century by her younger brother. Picking up Claudel’s story in the year 1915, the film uses personal correspondence and medical records to detail her experiences - focusing on Claudel’s attempts to win her freedom over the course of a three day period.

Initially excited about her brother’s pending visit to the mental asylum, Claudel grows more heated in one-on-ones with both her doctor and sibling as she fights to defend her sanity amidst a growing sense of panic and despair.

One of the most divisive voices in European cinema of the past twenty years, French auteur Bruno Dumont’s work can be so alien in its rigid formalism that it even makes Michael Haneke’s most severe misanthropic hectoring seem like a casual stroll in the park.

A measured, moving account of a brief period in the later life of the troubled sculptress, could hardly be the work of anyone else, with its sparseness of technique and persistent spiritual curiosity.

Conveying the intelligence, anxiety, anger and isolation of an artist abandoned by her family, unable to work and forced to live with women mostly far less capable even of surviving than herself, Binoche displays both eloquent expertise and an admirable control.

Ms. Binoche's portrayal of Camille is one of the most wrenching performances she has given.

It seems like a departure, but soon turns into a Bruno Dumont film-and one of his most rigorous and powerful at that.

A mesmerisingly intense yet controlled lead by Juliette Binoche.

Juliette Binoche’s portrayal of the ill-fated artist is a study of restraint peppered with brief outbursts of emotion -- a riveting performance in an imposing, at times off-putting micro-biopic.