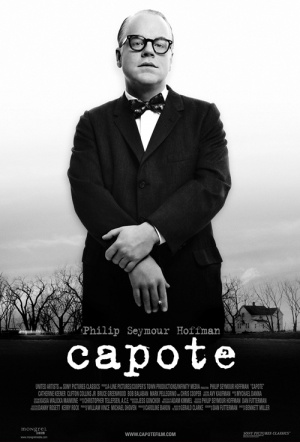 Philip Seymour Hoffman - in an Oscar, BAFTA and Golden Globe-winning performance - is author Truman Capote. Set in 1959, it covers the fey New York writer's dubious methods in writing In Cold Blood, his non-fiction chronicle of a brutal Kansas murder and its subsequent trial.

Inspired by the story material, Capote and his partner Harper Lee (Catherine Keener), travel to the town to research for an article. As he digs deeper into the story, he is inspired to expand the project into what would be In Cold Blood - considered by some to be the first non-fiction novel. Capote arranges extensive interviews with the prisoners, especially Perry Smith (Clifton Collins Jr.), an articulate man with a troubled history. Capote feels compassion for Smith, a feeling that conflicts with his journalistic duties and the need for closure on his book.

The mesmerizing performance of Philip Seymour Hoffman as the celebrated writer dominates every scene... Enthralls in every aspect.

A fascinating and fine-grained reconstruction.

A film of uncommon strength and insight.

An exceptional movie that digs deeply into an artist at the height of his creativity.

An outstanding film, showcasing a great performance, at once celebrating, analysing and criticising an important writer and his major book.