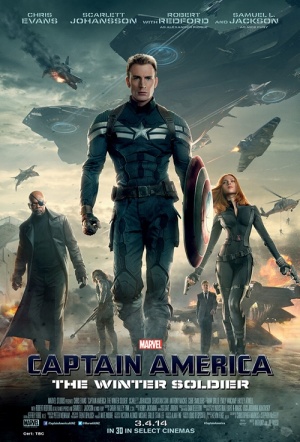 Aboard a SHIELD ship taken by Algerian pirates, Rogers learns that Natasha Romanoff, aka Black Widow, has her own set of orders from Fury that differ from his. After confronting Fury, he's introduced to a secretive project, Operation: Insight, which will allow the organisation to pre-emptively police the planet - the master project of SHIELD head honcho Pierce. When Fury is attacked and shot by superhuman assassin the Winter Soldier (Sebastian Stan), Rodgers and Romanoff become unsure of who to trust...

Ever since they showed the big boys how it was done with 2008's Iron Man, Marvel Studios has consistently set an impossibly high standard for itself, which it even more impossibly continues to meet.

The perils of global diplomacy, and the difficulty of being an old-fashioned guy in a new-fashioned world, weigh heavily... surprisingly equal second solo outing.

A tremendously satisfying blockbuster… Despite its running time, it never drags thanks to a consistent line in bruising set-pieces.

Delivers a heavy and welcome dose of paranoia, administered between fleetly paced smackdowns.

This sequel gives the flagging comic-book movie an adrenaline shot of relevance. You've got to hand it to them.

Some impressive early fight choreography is wasted on poorly composed action sequences, and there's no thrill to the story's unfolding despite capable digital imagery.

Benefits from an old-school-thriller tone that, for its first half at least, distinguishes it from its more obviously superheroic Marvel cousins.