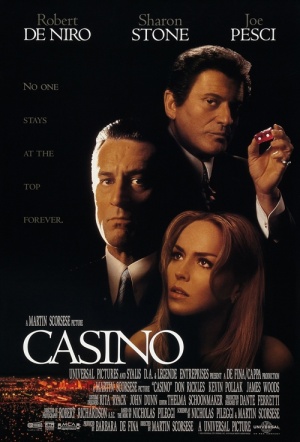 Reprising their collaboration on Goodfellas (1990), director Martin Scorsese and co-writer Nicholas Pileggi bring this true-story crime drama based on the rise and fall of ace gambler Sam Rothstein, working for the Mafia in Las Vegas. Robert De Niro plays Rothstein, Joe Pesci is his enforcer, and Sharon Stone plays his wife in a Golden Globe-winning performance.

Rothstein is called on by the Mob to run the Tangiers casino in Vegas. Meanwhile, Nicky Santoro (Pesci) is sent down by the Chicago Mafia to keep things in check and ensure profits are being skimmed from the casino. But greed, deception, power, murder and Rothstein's trophy wife (Stone) come between the two friends and threaten to topple the gambling empire. De Niro's Rothstein is based on Frank Rosenthal, and Pesci's Santoro based on Anthony Spilotro.