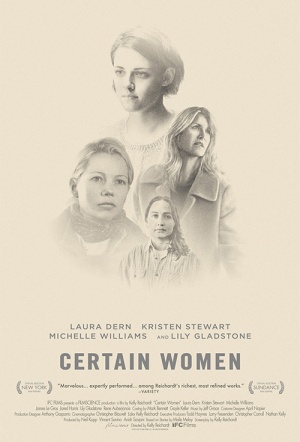 "Certain Women drops us into a handful of intersecting lives across Montana. A lawyer (Dern) tries to diffuse a hostage situation and calm her disgruntled client (Jared Harris), who feels slighted by a workers’ compensation settlement. A married couple (Williams and James Le Gros) breaks ground on a new home but exposes marital fissures when they try to persuade an elderly man to sell his stockpile of sandstone. A ranch hand (Lily Gladstone) forms an attachment to a young lawyer (Stewart), who inadvertently finds herself teaching a twice-weekly adult education class, four hours from her home." (Sundance Film Festival)

Like Reichardt's directorial hand, the performances are understated across the board, but deeply felt.

A neatly executed but slightly arid exercise in literary adaptation.