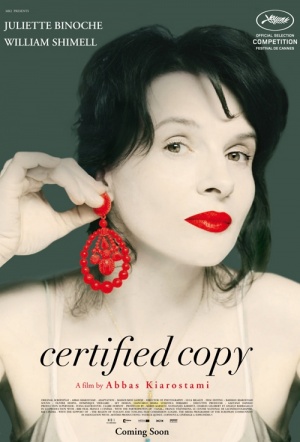 "Cannes 2010 was the year of Juliette Binoche. She graced the Festival’s poster; then she took the Best Actress Award for her role in this tantalising film. She plays a nameless woman who lives with her son in the south of Tuscany. British author James Miller arrives to promote his book, also entitled Certified Copy, a treatise about originality and copies in art and in life. She’s a journalist who writes about books and offers to take him on a tour to a nearby village so they can talk." (New Zealand International Film Festival 2010)

More compelling as an intellectual exercise than an emotional one, Certified Copy finds deep-thinking writer-director Abbas Kiarostami asserting there's nothing new under the Tuscan sun, particularly not his own conventional romantic drama set in rural Italy.

Binoche has a chance to display her noteworthy gifts as a comedienne, switching effortlessly from English to French and Italian to build a character that is resentful, manipulative and seductive all at once.

An exceptional film that plays with what is real and what is imagination. While exploring language and communication, this drama is both funny and intense.