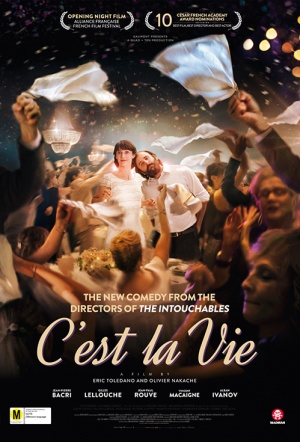 "Max (Bacri) is a battle-weary veteran of the wedding-planning racket. His latest — and last — gig is a hell of a fête, involving stuffy period costumes for the caterers, a vain, hyper-sensitive singer who thinks he's a Gallic James Brown, and a morose, micromanaging groom determined to make Max's night as miserable as possible. But what makes the affair too bitter to endure is that Max's colleague and ostensible girlfriend, Joisette (Suzanne Clément), seems to have written him off, coolly going about her professional duties while openly flirting with a much younger server. It's going to be a very long night… especially once the groom's aerial serenade gets underway." (Toronto International Film Festival)

From Olivier Nakache and Eric Toledano, writer-directors of acclaimed French drama The Intouchables, comes a wedding comedy with a great cast, shallow characters, and an undemanding plot.

The script isn't quite good enough to function as an alibi for its scene-by-scene implausibility, and the action isn't sufficiently credible to excuse the lack of really sharp gags.

C'est La Vie! starts a little tentatively... But once the film hits its straps - which it definitely does - C'est La Vie! becomes a likeable, witty and occasionally downright poignant and insightful little gem.

A Robert Altman-esque roam, encompassing everyone from Max's employees to some truly garrulous guests, C'est La Vie!... is French farce baked to perfection.

Co-directors and screenwriters Eric Toledano and Olivier Nakache (Untouchables) pull another magical trick out of the hat with a ruthlessly-plotted breeze of ensemble good humour, C'est La Vie!

A small, but sweet, and very French concoction.

This is an expertly assembled, tartly played and hugely enjoyable romp...