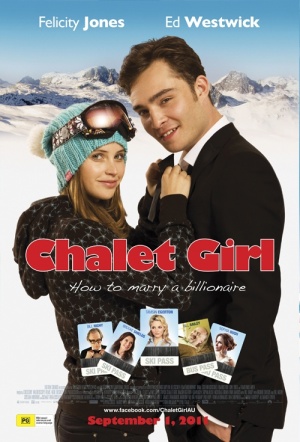 Tomboy and former champion skateboarder, Kim (Jones), is bored stiff with her dead end, burger-flipping job. But opportunity knocks in the form of a catering job in the one of the most exclusive chalets in the Alps. Baffled by this bizarre new world of the extremely posh, Kim soon discovers snowboarding and the chance to win some much-needed prize money at a competition. Distractions arise via Jonny (Westwick), her wealthy, handsome – though spoken for – boss.

A chirpy, tween-skewing, snowboarding-themed romantic comedy, "Chalet Girl" slaloms exuberantly down a predictable path, kicking up regular flurries of fun along the way.

Steered to success – just – by [Felicity] Jones, a natural, likeable everygirl who will make you care.

Corny and proud of it, Chalet Girl has no pretensions beyond inspiring laughs and gathering empathy for an endearing central character.

Threatening to sink into a squishy mulch of inadequately scripted formula, [Jones] keeps buoying it right back up.

Refreshingly funny Brit-com that ticks all the right boxes.