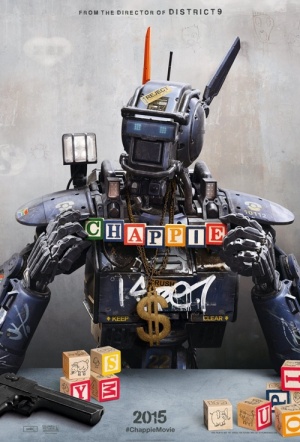 A robot police force has helped to reduce Johannesburg’s violent crime rate, and now their creator Deon (Dev Patel) can perfect his next obsession – creating artificial intelligence. Using a clapped-out robot destined for the scrapheap as a vessel, Deon brings his concept to life, but the pair are soon kidnapped by gangsters (Yolandi Visser and Ninja) who not only name the childlike AI “Chappie” but begin teaching it all the wrong lessons. With Chappie’s education heading in unexpected directions and a workplace rivalry between Deon and Vincent (Hugh Jackman) spilling violently on to the South African streets, a collision between machine and man looms.

Within the first five minutes of Chappie, director Neill Blomkamp has already borrowed extensively from his own scant two film career (and genre classic RoboCop) as a documentary-style introduction is followed by private policing robots rolling out onto the violent streets of Johannesburg. It’s so obvious that in anyone else’s hands it’d be called plagiarism, in Blomkamp’s “lazy-ism” may be a better description, one that infuses much of his film.

Winds up feeling as clunky and confused as the childlike droid with which it shares its name.

Like its title character, Chappie is stunning to behold and easy to like, but it’s still some way from fully developed.

This hugely entertaining oddity could never be mistaken for the work of any other filmmaker.

It’s a brawny, inventive action romp that’s as happy firing rockets at helicopters as it is contemplating the Cartesian model of mind-body dualism.

Chappie is a broad, brash picture, which does not allow itself to get bogged down in arguing about whether or not “artificial intelligence” is possible. It has subversive energy and fun.

Chappie’s biggest problem is the degree to which it echoes other films...

Chappie is a further downward step for director Neill Blomkamp.

Blomkamp’s third movie has just about enough spectacle and quirk to overcome some fairly major flaws, not least of which is an unappealing central trio. Clip: Burn It to Ash