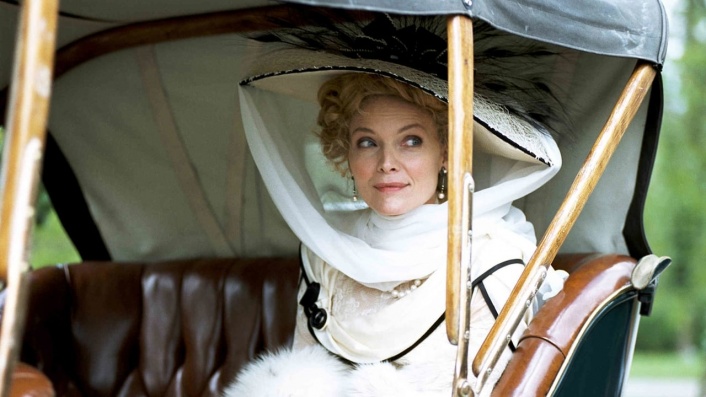 It is turn of the century in Paris and a scandalous romp is underfoot. The ravishing Lea (Michelle Pfeiffer) contemplates retirement from her renowned stature as Paris' most envied seductress to the rich and famous, but her plans are cut short when she is approached by a former courtesan and arch rival, the barb-throwing gossip Charlotte Peloux (Kathy Bates). Charlotte encourages Lea to teach her disaffected 19-year-old son - a bon vivant nicknamed Cheri (Rupert Friend) - a thing or two about women. The resulting escapades involve power struggles over sex, money, age and society - and unexpectedly, love itself - as a boy who refuses to grow up collides with a woman who realizes she cannot stay young forever.

Directed by Stephen Frears (The Queen) and written by Christopher Hampton (Atonement) based on the 1920 novel by Collette.

Like a passable bottle of champagne, Cheri fizzes and slides down quite easily but lacks real body and doesn't really hit the spot.

This reunion of Dangerous Liaisons talent is a lighter, less demanding confection than its blistering predecessor. Languid delights come in the shape of Pfeiffer, Bates and some extraordinary hats, but the title character is a wash-out.

There's something poignant about the image of this actress (Pfeiffer) sitting in a pool of sunlight without a smile or trace of visible makeup. But she's trying to reach a character that her director seems intent to keep from her grasp.

The success of Stephen Frears’ film Chéri begins with its casting. Michelle Pfeiffer, as Lea de Lonval, is still a great beauty.

Quite how the director of My Beautiful Laundrette, The Hi-Lo Country and High Fidelity can turn in such turgid nonsense is odd.

Witty, stylish and lighthearted, yet an emotionally aloof romantic drama.

Michelle Pfeiffer is back, and her reappearance in Cheri, her best role in quite some time, underlines not only how much she's been missed but also how much the world of film has lost by her absence.

Actors blossom under Frears' direction. There is no false moment or off-key note in this movie.

This glimpse into a decadent era has its charms, but they’re mostly visual. While Pfeiffer and Friend perform well, the script is tonally confused and lacks edge.