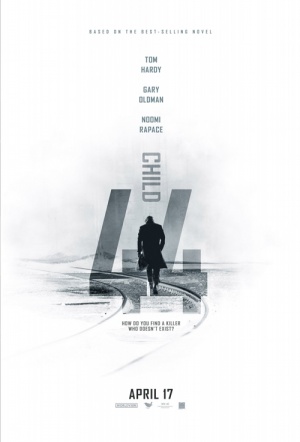 In 1953 Soviet Russia, the film chronicles the crisis of conscience for secret police agent Leo Demidov (Hardy), who loses status, power and home when he refuses to denounce his own wife, Raisa (Rapace), as a traitor. Exiled from Moscow to a grim provincial outpost, Leo and Raisa join forces with General Mikhail Nesterov (Oldman) to track down a serial killer who preys on young boys. Their quest for justice threatens a system-wide cover-up enforced by Leo’s psychopathic rival Vasili (Kinnaman), who insists “There is no crime in Paradise.”

Plays like a curious relic of an earlier Cold War mindset...

Hardy is immaculate as Leo, from accent to demeanour.

A striking example of how a single, wrongheaded choice can doom an entire movie.

When it finally gets going, it becomes gloweringly compelling, shored up by its strong supporting players, handsome photography and sheer, clanking momentum.

It’s a wash, starting with a Europudding assemblage of performers of all nationalities besides Russian.

This $50 million Ridley Scott production does benefit from strong performances...

This overwrought thriller is a pedestrian period piece that squanders its potential.