I didn't expect much from Chronicle, particularly since it has been hyped quite a lot in the media, which is rarely a good sign. I was therefore really happy to experience a complex movie with interesting cinematic ideas and enough themes to keep everyone happy. For those wanting a bit more emotional depth, the characters' relationships develop plausibly. For comic book geeks like me, there's a fantastic take on the superhero origin story, using plot themes which have been seen a gazillion times before but done in a way which respects and acknowledges the pillars of the genre but makes it seem fresh and real. The effects, while clearly shoestring are great fun and I was engaged throughout. Most of all, I was gripped with a sense of tension and impending disaster from early on. Maybe this was due in part to the adverts I'd seen which had made it clear where things were leading (I hate adverts!); maybe it's just that shakeycam films never end well.
Speaking of camera, we're all familiar with the found footage style of cinematography now, but I thought that Chronicle did take things a little further, attempting to use the viewpoint as a metaphor for Andy's distance from society. This is openly discussed by the characters and perhaps isn't made full use of, but it was a nice addition. 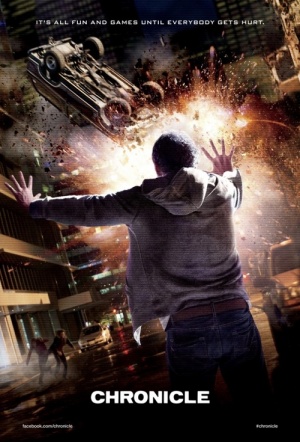