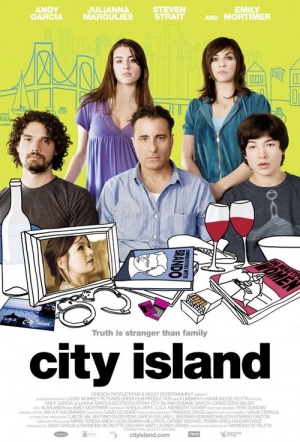 Set in a quaint fishing community on the outskirts of New York City, this is a comedy about a family whose compulsive capacity to lie creates a perfect storm of deception, half truths and confusion...

Dad Vince (Andy Garcia) is the worst offender: a corrections officer who won't admit that "poker night" is in fact acting class, plus he has an illegitimate son. His daughter works as a stripper when she's supposed to be in college, while young Vinnie Jr has a secret sexual fetish that involves a 24-hour webcam and the family's 140kg neighbour. Vince's fiery wife Joyce (Julianna Margulies) is the family's rock, but it's been a year since she enjoyed intimacy with her husband, and she thinks "poker night" spells "affair".

When Vince's drama teacher (Alan Arkin) encourages him to reveal his biggest secret in class, the father becomes inspired by the truth. He brings his other son (Steven Strait) into the family and sets off a chaotic chain of events that turns his mundane suburban life upside down.

Andy Garcia keeps it in the family...

A professionally executed farce of the yelling-family variety, “City Island” revolves around a blue-collar clan with more secrets than filters. At the head of the table is Vince (Andy Garcia), a stolid corrections officer and clandestine acting student; facing him is Joyce (Julianna Margulies), the wife who wonders where the passion has gone. Add a daughter (Mr. Garcia’s real-life daughter, Dominik Garcia-Lorido) who’s stripping instead of studying and a teenage son (Ezra Miller) who fantasizes about feeding doughnuts to fat women and you have a household that, even by current comedy standards, strains credulity.

A labour of love for producer-star Andy Garcia, this drama of blue collar lives in New York is a little on the soapy side, says Peter Bradshaw

Vince is a man with a dream. Marlon Brando is his god. He would like to become an actor. This is not likely. He's well into his 40s, a prison guard living with his family on City Island, a bucolic outcrop of the Bronx known mostly to its residents. Telling his wife he's going to a poker game, Vince attends acting classes in Manhattan. In one class, Vince creates a spot-on imitation, not of Marlon Brando, but of bad Brando imitators.

A little drama, a little farce, a little humour, an easy film to enjoy and forget

An, at-times, marvellous muddle of high farce and low-brow chuckles

The real City Island is less of an actual island and more a big sandbar, really.