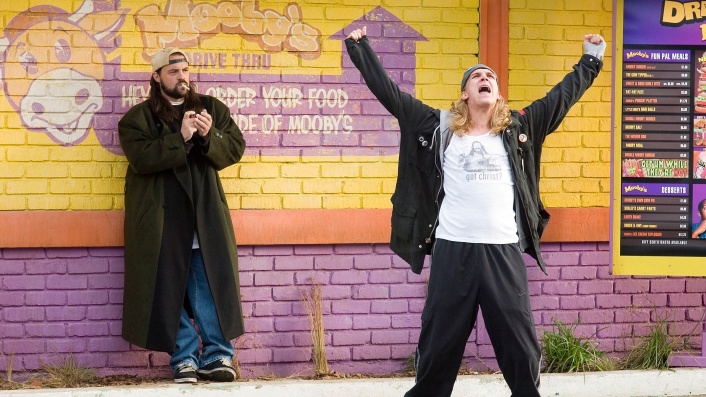 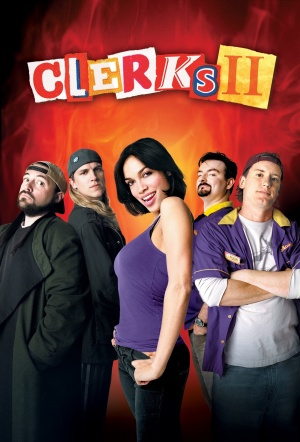 Kevin Smith's sequel to his own indie, slacker hit (1994’s Clerks). Ten years on, Dante (O'Halloran) and Randal (Anderson) remain prime examples of white suburbanites content with no ambition - elevating doing nothing from a lifestyle choice to a moral principle. Says Smith: "It's about what happens when that lazy, 20-something malaise lasts into your 30s. Those dudes are kind of still mired, not in that same exact situation, but in a place where it's time to actually grow up and do something more than just sit around and dissect pop culture and talk about sex".

Film follows the two at their new job at Mooby’s, a local fast food chain, and reaches new limits of gross-ness (there's donkey sex). Dante is at risk of settling down, planning to wed his controlling fiancée Emma (Schwalbach) and take up her fathers offer for a ‘real’ job. Meanwhile Randal - always the more hostile of the two - starts to become overwhelmed by his own rancor.

Clerks II finds Smith up to the profane, raunchy, profoundly humanist mischief of which he alone is the master. This is a lewd, lascivious, exhilaratingly life-affirming celebration of misfits and the misfits who love them...

Any movie featuring a guy who has sex with a donkey -- he calls it "interspecies erotica" -- cannot be accused of playing it safe. You too may want to see if a dude with a mouthful of donkey spunk really swallows...

Part of the Clerks charm was that Kevin Smith made it for $27,000, and a bigger budget doesn't really help this kind of tale's authenticity...

But it's largely rambling and only fitfully funny, throwing in music montages and a dance sequence in an effort to shake itself out of its self-induced stupor...

It has enough laughs, character arcs, politically incorrect rants and a satisfying emotional ending to more than justify this whim on Smith's part...

Ultimately, Smith finally achieves that perfect balance between humor and heart that he's been dancing towards with all his films...

Avoiding the excess of characters that blighted his last few films, Smith's focus on Dante, Randal and the small Mooby's crew pays huge dividends with their personalities shining through... The easily offended and faint of heart should give this a wide berth, but, like me, there will be a large audience who will be disgusted but just can't look away...